Good Night, and Good Luck is George Clooney’s directorial follow-up to Confessions of A Dangerous Mind, and reconfirms his position as one of the most provocative helmsmen working today.

A tense drama set in the CBS newsroom, this is the real-life story of Fred Friendly (an understated Clooney) and Edward R. Murrow’s (a superb David Stathairn) refusal to back down to Witchfinder General, Senator Joseph McCartney, and insistence on reporting the truth, in spite of the danger staring them in the face. 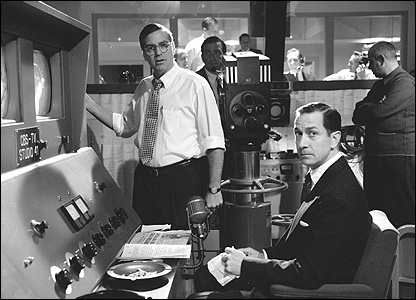 This film is significant in that it still resonates today, and begs the question of just how much has changed in 50 years? Perhaps the greatest difference is in how much of an impact a journalist can make with integrity on his side.

Warning – you may catch cancer just from watching this film. Apparently everyone had a fag on the go at all times in the 50s.